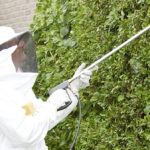 Wasps often rear their ugly heads between mid-spring and early summer. However, by the time you notice these pesky critters flitting about your yard, they’ve already holed up in a massive nest somewhere in a dark corner of your home. Taking out a fully-grown wasp nest is doable, but it’s not a task for the faint of heart.

To avoid much of the pain of removing wasps from your home, you must eliminate them when they are at their most vulnerable. A bit of knowledge about the wasp life cycle will help you to manage the problem before they take over your shed.

As winter begins, wasp colonies die off due to starvation, and queens enter hibernation. Hibernating queens will retreat to sheltered places like crevices, but only a handful survive the winter. Many fall victim to predators like spiders, and warmer winters encourage many of them to come out before flowers produce enough food to support them.

During this phase, take note if you find that a rogue queen has entered your home, and find any possible entry points to seal off. Additionally, hibernation is the best time to rid your home of any lingering nest remains and prevent future building in the area.

Once spring begins and queens emerge from hibernation, they aim to rapidly establish colonies. First, the queen chooses a suitable location for a new nest. Though wasps rarely re-use old nests, they often build near them because of favorable conditions like:

Therefore, you should take note of areas of your home that might make ideal nest locations and inspect them frequently. Preventative measures like adding a bit of light can make an area inhospitable to wasps as well.

Once the queen has found a suitable location, she will collect wood to turn into a pulp to build the nest, making small, scratch-like indentations on fences and walls. Then, once the queen has built a protected nursery, she will begin to lay her eggs and nurture them until they are fully grown.

From mid-spring through the summer, colonies expand and form massive nests. Once the queen has hatched enough drones, or worker wasps, they begin to take on various tasks to maintain and expand their nests. Nests are at their most active during this period, which lasts until the queen decides to mate.

Somewhere between late summer and late fall, the queen will decide to mate, creating the new queens and drones to carry the species into the next year. The queen fertilises eggs, and once her progeny is produced, nests release them into a massive mating swarm, which lasts for a handful of hours. The new queens then seek shelter, and the drones must roam for food. These roaming males often become the nuisances that attack and sting as they venture into your gardens and backyards.

If you have any problems with wasps in your house or your office, do not hesitate to contact us and we will take care of your problem.