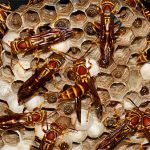 Wasps Control – different stinging insect species based on their nests

Wasps (control), hornets and bees all serve as important pollinators for the environment. But, when they construct nests in, on, or near our homes; they can cause costly damage and can even become a serious health threat.

In fact, stinging insects send more than 500,000 people to the emergency room every year. When it comes to wasps control in London; it is important to know which species you are dealing with and the threats they may pose.

While they can be distinguished by their physical appearance; being able to recognize different nests can help homeowners identify various species from a safe distance. Read on for a complete guide to identifying stinging insect nests.

There are several species of yellowjackets, all of which typically have a yellow and black head along with a patterned abdomen. These social insects live in nests or colonies; with up to 4,000 workers and are most active in late summer and early autumn. Yellowjackets feed on sweets and proteins; so they’re known to invade outdoor events like barbecues.

Yellowjackets and their nests can be found anywhere humans are found. Their paper carton nests, built out of chewed up cellulose; can be found both above and below ground. Aboveground nests can be constructed under eaves, in attics or inside a building wall void.

Underground nests usually have a small, difficult to see entrance hole. Keep in mind, yellowjackets can venture up to hundreds of feet away from their nest, so it may not always be in plain sight when you initially encounter the insect itself.

The bald-faced hornet gets its name from its largely black color and mostly white face. They live in colonies containing between 100 and 400 members and are most visibly active during the day. This species usually appears in late summer and, unlike other stinging insects, will not reuse the same nests season after season. Instead, new colony members build new nests each season.

Bald-faced hornets build paper nests at least three or more feet off of the ground. Their nests can usually be found in trees, shrubs, overhangs, houses and sheds. Bald-faced hornet nests can be up to 14 inches in diameter and more than 24 inches in length. Unlike the open cone nest structure used by other stinging insects such as yellowjackets and paper wasps, their grey aerial nests are enclosed.

Bald-faced hornets are aggressive and will attack anyone or anything that invades their territory. Similar to yellowjackets, they can sting repeatedly using their smooth stingers. These pests carry venom that makes their stings hurt, itch and swell for about 24 hours.

Paper wasps get their namesake from the paper-like material they use to build their nests. They’re also referred to as “umbrella wasps” based on the distinctive shape of their nests. This species lives in small colonies and eats nectar, as well as other insects including flies and caterpillars. Emerging in the springtime, they have a similar body shape to yellowjackets but are mostly brown in color.

This species often builds nests in residential yards, hanging from objects such as trees, porch ceilings, deck floor joists and more. Their umbrella-shaped nests have open, uncovered cells where eggs are laid.

Credit for images and full article on Pest World.