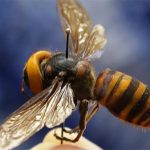 In summer, wasp infestations are an unfortunate truth that happens in the United Kingdom, year after year. There are many types of wasps and they breed in large numbers and, as you may know, they like to attack. Fortunately, Pest Control 24 can help you deal with Wasp infestations in London.

What types of Wasp Infestation in London we can help with:

Why are wasps dangerous?

Wasps stings release venom that can lead to anaphylaxis and death in the worst case, and a very painful sting in the best case. Not only that, but they are a pest that builds big, eye-sore nests. Moreover, they also call for help when they attack and even a person that is not allergic to wasps can have an anaphylaxis shock. They also cause Wasps Infestation in London.

These giant Asian hornets caused panic in 2020 when they started appearing in the UK. This large hornets decapitate bees and take over their nests. They also have a very powerful sting and attack in large groups, so they really are a threat to the population.

If you need help with any wasp species, at any time and on any day, call Pest Control 24 at 0203 151 6812. Our technicians are trained to deal with all types of wasps and have all the tools necessary to end an invasion.

Wasps Control – different stinging insect species based on their nests