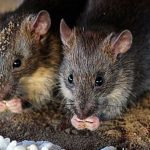 A man who died on a bus in China has tested positive for a virus more fatal than Covid-19; – hantavirus – that has very similar symptoms, state media reports.

The victim died on a vehicle in Shandong as he made his way to work and was found to be suffering from hantavirus. News of the death comes just as the country is lifting quarantines; implemented to deal with the novel coronavirus that originated in Wuhan.

Yesterday the Global Times informed followers of the reason behind the worker’s death on social media; tweeting: ‘He was tested positive for #hantavirus. Other 32 people on bus were tested.’

The incident has sparked panic across China, with # hantavirus trending on social media.

Experts have reassured the public that this is not a new virus and is thought to only pass through humans in rare circumstances; unlike Covid-19, which has sparked a pandemic.

Swedish scientist Dr Sumaiya Shaikh tweeted: ‘The #Hantavirus first emerged in 1950s in the American-Korean war in Korea (Hantan river). ‘It spreads from rat/mice if humans ingest their body fluids. Human-human transmission is rare. Please do not panic, unless you plan to eat rats.’ Although hantavirus is rare, it carries a 38 per cent death rate according to the US Centers for Disease Control and Prevention (CDC).

Exposure to the urine, droppings or saliva of infected rodents can result in the virus being transmitted, as can bites from infected rats and mice.

If you need a rats inspection to your home or business call Pest Control 24 London.

Credit for image and full article on DailyMail.co.uk.