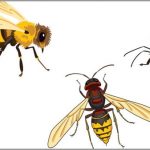 It is advised that customers know the difference between Honeybees, Bumblebees and Wasps before calling a pest controller.

Honey bees are one of the most important species the planet has to offer. They help with polinating flowers, collecting nectar and regulating our environment. Below, you will find how to differentiate between honeybees, bumblebees and wasps.

Adult workers range in length from about 1/2 to 5/8 inches. Honey bees are usually orangish brown in color to sometimes black. Their colours are Black, Orange and Dark Brown.

Similarly, Male honey bees, or drones, are about 5/8 inches long, and do not have a stinger.

It is important to remember that HoneyBees, Bumblebees unlike wasps are not a pest and should not be treated as such. In the UK, they are treated as endager and pest controllers can not kill them.

Bumble bees are large and robust. They typically measure between 0.3 to 0.9 inches, but can grow up to 1.5 inches. The queen is almost twice as large as the worker bees.

Distinct color patterns arise across the species, varying greatly from one bee to the next, even in the same species in the same region. They can be completely black, black with yellow or for instance with white bands, black with an orange abdominal tip, brightly-colored yellow or even a dull and rusty orange.

Do not attack Bumblebee nests as they can become aggresive. Its also important to remember that unlike honeybees, bumblebees don’t die when they sting.

Yellow Jackets are yellow and black with stripes or bands on their abdomen. Workers are typically around ½ inch long. Like all insects yellow jackets have six legs and three major body parts: the head, thorax, and abdomen. Similarly, they have four wings and two antennae.

Wasp venom contains a pheromone that causes other wasps to become more aggressive. Try not to make sudden movements around wasps, especially if you are near a nest.

If you see a Wasp, it is important to call a Pest control worker. Unlike Honeybees and Bumblebees, Wasps are dangerous and are widely considered to be a pest. Also, If you see a nest, stay calm and move away slowly and call a pest controller.