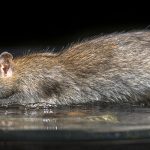 Rodents Pest Control – It’s not uncommon; especially during the winter months; to have an unpleasant encounter with a rodent who has made its way into a home uninvited. What many people do not realize, however, is that these pests can be much more than a nuisance. Rodents such as rats and mice are associated with a number of health risks. In fact, rats and mice are known to spread more than 35 diseases.

Rodent droppings can trigger allergies and transmit food borne illness such as salmonella. Furthermore, mice are capable of dropping up to 25,000 fecal pellets each year, an estimated 70 times each day. Therefore, prevention and prompt removal in case of a rodent infestation is key.

Below is a summary of some of the most common diseases associated with rodents: Hantavirus, lymphocytic choriomeningitis, tularemia and plague.

Hantavirus includes a group of viruses that can sicken humans and cause kidney, blood or respiratory ailments, as well as fatality in some cases. While it is relatively rare, it is very serious and unpredictable. Rodents pest control services can help you get rid of these pests in your home.

The primary host of LCMV is the common house mouse. It is estimated that 5% of house mice throughout the UK carry LCMV and are able to transmit the virus.

Plague is infamous for killing millions of people in Europe during the Middle Ages. It is a disease that affects humans and other mammals and is caused by the bacterium, Yersinia pestis. Humans usually get plague after being bitten by an infected rodent flea or by handling an animal infected with plague, such as a rodent.

Tularemia is a disease of animals and humans caused by the bacterium Francisella tularensis. Rabbits, hares, and other rodents are especially susceptible and often die in large numbers during outbreaks. Humans can become infected through several routes, including tick and deer fly bites; skin contact with infected animals; ingestion of contaminated water; and through laboratory exposure or inhalation of contaminated dusts or aerosols.

If you are looking for professional pest control services in London, contact our team for a FREE price estimate.

How mice affect houses across London in winter

Mice in Walls and Attics