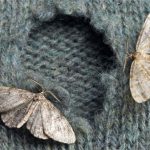 Clothes moths appear to be in greater numbers

One of Britain’s grubbier little secrets is out of the closet. Clothes moths appear to be making an annoyingly widespread return; – their numbers swollen by the insects’ love for our bulging, and not always impeccably laundered, wardrobes.

Some have attributed this to the demise of the traditional mothball, others to global warming. But, it seems; the real problem is us and our over-heated bedrooms; full of more clothes than ever before. Not all of which are as clean as they could be.

The larvae of the common clothes moth; or Tineola bisselliella, can live for up to two years among our clothes. And these days they have an awful lot more to lunch on. Consumer expert Lucy Siegle said research by Cambridge University indicates that; the average British woman buys about 62lb (28kg) of clothes each year and has four times as many clothes; in her wardrobe as she did in 1980.

Pest controllers such as Cliff Randall from London say that; the number of moth-related call-outs he receives has more than doubled since December 2010. “Before Christmas I would usually do three to four a month, but in the past six months that has risen to more like three to four a week,” he said. “Most clients are uncertain where the infestation is coming from, but we almost always find the source under a large piece of furniture that hasn’t been moved in a while and has just been Hoovered around rather than under. It offers a perfect breeding ground, and then clients realise too late that a big chunk of their carpet is gone.”

Credit for image and full article on Independent.co.uk.